Sometimes you have to wonder how the American Family Association can say much of what it does with a straight face. The latest screed from the homophobic hate group involves them calling out the Southern Poverty Law Center for the “immoral” tactic of calling for the boycott of right wing favorite Chick-fil-A, going so far as saying “it shows that the left uses boycotts and pressure campaigns to wage “economic warfare against their political enemies“.

It is economic warfare against their political enemies, that’s the only way to describe it, it is literally economic warfare against their political enemies; it is nothing more than that, nothing less than that. The left is almost universally unscrupulous, they are amoral—that’s part of their philosophy—so they feel free to attack anybody and anything that they don’t like and they have legions of lawyers willing to go into court and sue and sue and sue again. They’re organized base is willing to uniformly engage in economic boycotts of companies so it’s a highly organized, almost a military type of organization, very monolithic that gets behind the leaders on any issue and they attack people, and they attack people and terrify people. We don’t have anything like that we are not inclined to do that because we are not that immoral, we just don’t do those kinds of things unless we are attacked first.

What is so funny is that while the AFA is condemning Liberals for using boycotts, the AFA is doing the exact same thing against numerous companies that they feel are just a bit too friendly to the LGBT cause including their highly publicized boycotts of JC Penny and Home Depot.

It sure is a good thing that we have the religious Conservatives working on our side to prevent gays from marrying and ruining the sanctity of all our marriages. After all we all know how seriously straight couples take the sanctity of that institution and we sure wouldn’t want to ruin that…

Kim Kardashian is filing for divorce just 72 days after tying the knot with Kris Humphries in a lavish ceremony that was taped for her reality show.

The results were quite telling and i’ll let you read the article yourself for the details but the bottom line was:

Homophobic men were the most sexually aroused by gay male sex acts.

It never ceases to amaze me just how much the religious right hates homosexuals. The latest example of this comes from Cindy Jacobs of Generals International. She puts out the absolutely absurd theory that the recent fish and black bird deaths could be a result of the repeal of Don’t Ask Don’t Tell.

Well, there’s something interesting we have been watching – let’s talk about this Arkansas pattern and say, could it be a pattern? We’re going to watch and see. But the blackbirds fell to the ground in Beebe, Arkansas, well the Governor of Arkansas’ name is Beebe. And also, there was something put out of Arkansas called Don’t Ask, Don’t Tell by a former Governor, this was proposed, Bill Clinton. As so, could there be a connection between this passage [Hosea 4] and now that we’ve had the repeal of the Don’t Ask, Don’t Tell where people now legally in the United States have broken restraints with the Scripture because the Scripture says in Romans 1 that homosexuality is not allowed.

It could be because we have said it’s okay for people who commit these kinds of acts to be recognized in our military for the first time in our history, there is a potential that there is something that actually happened in the land where a hundred thousand drum fish died and also where these birds just fell out of the air.

In case you hadn’t heard, the Dems tried to overturn the military’s policy on ignoring gays otherwise known as “Don’t Ask Don’t Tell” by attaching it to the National Defense Authorization Act.

Earlier this week the Senate attempted to put the bill up for debate and as has been the case with most legislation in recent memory, the GOP filibustered, the Dems cowered in fear, and President Obama whom had earlier said overturning DADT was a priority sat back and said almost nothing. In other words, business as usual in Washington.

Cartoonist Rob Tornoe has now chimed in with this in honor of our fearless leader’s willingness to back up his promises with actions.

Change we all can believe in…

I didn’t have a horse in last night’s Sioux Falls Mayoral runoff as I don’t live there but it was sure fun to watch. On one hand you had Kermit Staggers, a career part time legislator who seemingly never voted “yes” on anything in his life (love the Dr No. nickname Todd) and on the other hand you have a career credit card industry executive, Mike Huether, who cut his teeth in the predatory lending division of First Premier Bankcard. Just that background alone made for must watch TV but when it was learned that Huether had hired Democratic super consultant Steve Hildebrand, it became almost comical.

Fresh off his success helping Barack Obama win the White House, Hildebrand, who might be the most hated liberal from South Dakota, joined Huether’s campaign and the sparks began to fly. Did I mention that Hildebrand was Gay? That fact didn’t get lost on Sioux Falls blogging pastor Steve Hickey and soon thereafter we have this:

Mike Huether a step toward Sioux Falls becoming a haven for gays nationwide?

A fascinating, and only recently disclosed “detail,” is that former Obama campaign genius Steve Hildebrand is Sioux Falls Mayoral candidate Mike Huether’s campaign manager. Who are we kidding, Hildebrand has never even hinted that he gives a rip about Sioux Falls economics. To quote the Washington Post a few weeks ago… “[Hildebrand] is especially frustrated about the lack of progress on gay rights”. It’s well established that he’s all about gay rights and gay marriage and now gay adoption. And, good for him. I wish him well. Yet, friends tell me he’s been heard on a conference call to have said something to the effect that he aims to see Sioux Falls become a gay-friendly mecca. Maybe he didn’t use the word mecca, but the idea was that our city would become a place where homosexuals nationwide could come and live openly.

Of course as soon as Pastor Hickey went down that yellow brick road, the parrots in the homophobia flock began chiming in.

what’s next? city policy driven by the gay and lesbian crowd?

The gay community is puny compared to the number of values voters in town. Did you know Hickey is the president of the ministerial association? Obviously you are unaware that gobs of people are switching from Huether to Staggers right now because of the questions Hickey is raising. You should thank him for stirring them up by sending up this Giant Fireball warning. Giving gays the key to the city is economic suicide and Huether needs comment on any promises he has made to Hildebrand on gay issues.

So after the homphobic calls to action from the huge values voters block in Sioux Falls what happened? Exactly, Huether won going away.

I guess the only questions left to ask Mike Huether after his win last night are:

When will the gay and lesbian community in Sioux Falls get their key to the city?
When is the first annual gay pride parade?

Better watch out San Francisco, Huether is on the job.

Some in South Dakota’s blogosphere and political world take pride in their support of the Tea Party movement going so far as to call it an attempt to get America back to it’s roots in the past. Lately though the biggest part of that past they seem to be shooting for is the homophobic and racist part.

On Saturday, as a small group of protesters jammed the Capitol and the streets around it, the movement’s origins in white resistance to the Civil Rights Movement was impossible to ignore. Here’s only what the mainstream media is reporting, ignoring what I’m seeing on Twitter and left wing blogs:

Makes one wonder whether attendees at these rallies should be bringing their own white sheets or if maybe they will start providing them for you free of charge when you arrive.

If you are going to insist on showing off your intolerance and homophobia, maybe it would be a good idea to do so with at least a modicum of fashion sense (insert stereotype here). Open-Air Campaigners protester Michelle Deferio discovered that during her little protest at Syracuse University last month when the locals decided to turn her campaign against gays into a protest against her ankle length corduroy skirt. 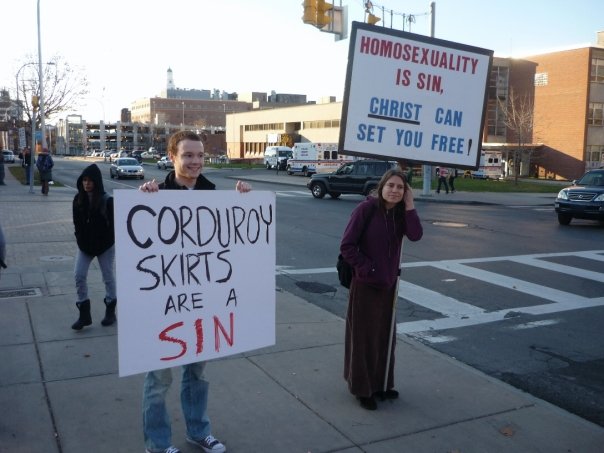 The anti fashion faux-pas sign holder, Chris Pesto, ended up attracting 100 or so folks in support of his campaign against corduroy skirts which by the way is also a biblical no-no (Leviticus 19:19) while Deferio ended up hearing from Syracuse University officials notifying her that she might want to take her protest elsewhere.

Texas is known for many ridiculous legislative ideas already but this one might take the cake. It is possible that in their haste to incorporate homophobia into the state’s Constitution in 2005 by banning same sex marriage and civil unions, they might have also banned all marriages in the process.

The amendment, approved by the Legislature and overwhelmingly ratified by voters, declares that “marriage in this state shall consist only of the union of one man and one woman.” But the troublemaking phrase, as Radnofsky sees it, is Subsection B, which declares:

“This state or a political subdivision of this state may not create or recognize any legal status identical or similar to marriage.”

Architects of the amendment included the clause to ban same-sex civil unions and domestic partnerships. But Radnofsky, who was a member of the powerhouse Vinson & Elkins law firm in Houston for 27 years until retiring in 2006, says the wording of Subsection B effectively “eliminates marriage in Texas,” including common-law marriages.

An Illinois High School English teacher has been suspended for having his students read an article documenting the fact that some so-called unnatural acts aren’t as unnatural as some would like you to believe.

Delong is said to have allowed students to read the article “The Gay Animal Kingdom” from the June 7, 2006, edition of Seed magazine. Seed magazine is a science and culture publication.

The article by Jonah Lehrer talks about the research of Joan Roughgarden, a biology professor at Stanford University who said she has documented homosexual societies among the more than 450 animal species.

Another example on how knowledge can be a terrible thing when it contradicts one’s world view. The more ignorant they are kept, the easier they are to control…